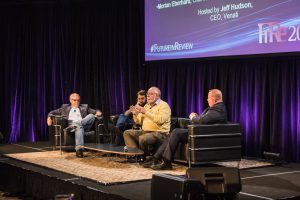 The second session of day 2 with a focus on intellectual property(IP) theft was hosted by Jeff Hudson, CEO of Venafi. Its focus wasn’t on revealing the problem, but on considering how to solve it.

The session began with a clip from 60 Minutes, which went through the findings of an INVNT/IP report on China’s government sponsored theft of American IP. The clip also introduced the story of McGahn’s company, which suffered serious damage due to IP theft despite their best efforts.

Anderson spoke on China’s end game with the consistent flow of stolen IP to eventually take over major parts of the global economy. He suggested that relentless development was being used as an anaesthetic by the Chinese government to quell public discontent.

“If you don’t have economic growth and you have an oppressive regime, the people will rise up,” he said.

Drawing on his experience in working as a Department of Defence attorney, Marshall chimed in to give historical context on the distinction between individuals stealing IP(like the US in the early years of its existence), and nation state sponsored theft like China’s methods. Evoking the metaphor of a frog not realizing that it’s in boiling water and dying, he made specific reference to the theft of Lockheed Martin’s F-35 blueprints.

“My professional frustration is that we did not do enough to keep it from happening,” he said.

He was the most strident in the panel in apportioning blame to different actors, from the US government, to universities, and the companies facing threats.
McGahn narrated the story of his company’s IP being stolen despite taking many measures to protect it. He said that after the Chinese hired about 800 engineers, tried to copy the technology and failed, they bribed a European employee of his company upto $2 million to transfer unencrypted files containing IP secrets. The employee was fired and jailed.
“We literally became the poster child of IP abuse,” said McGahn.

Anderson stated that while some Americans think that large American companies can defend themselves, they’re relatively weak compared to countries. He further stated that the solution lay in public-private partnerships.
Marshall disagreed with Anderson with McGahn, and said that any efforts to build public-private partnerships had been in vain. He laid greater emphasis on companies protecting their own IP, saying that national security agencies had a separate and specialized function, while reaffirming that some government intervention was necessary.

McGahn wanted the government to stand up directly to China.

“We did everything and beyond what anybody should do.”

At the end, the panel agreed upon a multi-pronged effort, including consequences for nation states stealing secrets, and government intervention for a fighting chance against the problem.