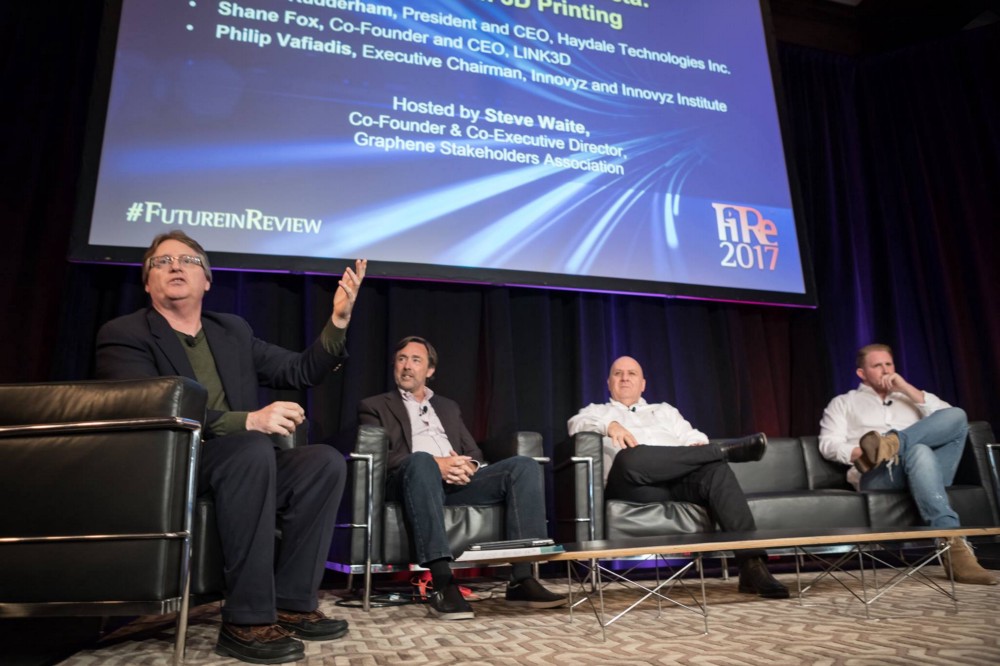 Stephen Waite, Co-Founder and Co-Executive of the Graphene Stakeholders Association moderated a panel regarding the cutting edge technology of additive manufacturing. Trevor Rudderham, CEO of Haydale Technologies, Shane Fox, CEO of LINK3D and Phillip Vafiadis, Executive Chairman of Innovyzl contributed their expertise to the conversation on how 3D printing is changing and will continue to change the manufacturing industry.

The panel began with Waite stating that so often we see investment dollars being put only into tech companies. He noted the enormous economic opportunities that there are with additive manufacturing. The fusion of technology with manufacturing will create major growth in the industry. He shared that 3D printing is expected to be a 20 billion dollars industry by 2020. By 2025 it is expected to have grown to 100–150 billion dollars.

“Humans think linearly, technology thinks exponentially, and that is where things get interesting,” said Waite.

Waite looked to Vafiadis for an explanation of some of the things his budding 3D printing company Titomic is doing. Vafiadis explained the cold fusion technique they are using to create better metal, 3D printed parts in a faster and cheaper way. He also told of a new material he recently held that acts like titanium but is more malleable and doesn’t react to heat and cold.

Waite turned the conversation to how materials themselves will become technology and invited Fox to tell how his company, LINK3D, is the embodiment of that. Fox spoke of how metallurgists are creating new materials, allowing for design without borders. He mentioned how technology typically makes our lives better and cited the improved environmental impact that additive manufacturing will have as an example of that.

“You can recycle almost 99% of the materials used in industrial 3D printing these days,” said Fox.

Rudderham finished up the panel by commenting on the changes that 3D printing could bring into the automotive industry. He explained that tooling costs to make changes to car designs require an long run time of any product in order to recoup the investment. With additive manufacturing, you can change designs with a tiny amount of cost.

“You could even get into mass customization,” said Rudderham.