The Theft of Nations 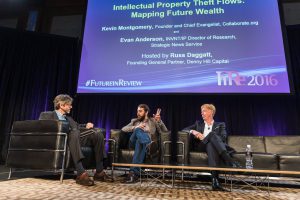 The late afternoon session provided a lot of previously unconfirmed but rumored confirmation about massive, sophisticated, and coordinated intellectual property(IP) thefts flowing from some countries to others. The panel consisted of Kevin Montgomery, Founder and Chief Evangelist, Collaborate.org and Evan Anderson, INVNT/IP Director of Research, Strategic News Service. It was hosted by Russ Daggatt, Founding General Partner, Denny Hill Capital

Anderson started by pointing out that INVNT/IP has a database of IP flows going back to 2001, originating from geotagged data points logging publicly disclosed thefts.

“The asset of innovation is intellectual property,” he said.

Montgomery visualized these flows by uploading them to collaborate.org. The resulting data was displayed on a globe, with animated arrows flowing from the origin country to the destination country of the IP. Red arrows referred to public thefts, purple to known but publicly undisclosed thefts, and black being projected and unknown threats.

Anderson revealed that 90 percent of intellectual property theft is not known by the victims. This problem is further compounded by the fact that companies who do disclose IP theft are punished by the system. Further amplifying the sense of scale, Anderson said that of the 10 percent of theft found and understood by the victims, only 10 percent is publicly disclosed.

The IP theft map showed the vast majority of data flowing from North America to Moscow and 13 cities in China, with the latter dominating with 96 percent of cases according to Verizon. There were also large flows from India to China and from continental Europe to the United Kingdom.

The discussion was then steered towards the methods of stealing. Anderson suggested that that the Russians might be better at hiding thefts than the Chinese, who are far more blatant. He also emphasized that while cyber theft is growing, older forms of industrial espionage like insider spies and physical thefts are still very prevalent.

He mentioned a “classic smash and grab job from China,” where employees of Huawei visited a T-Mobile office in Seattle as visiting researcher. They stole machines from the lab, faked keycards to admit more people into the lab than allowed, and were caught on camera live streaming video to China while measuring the devices. However, the panel concluded that the era of blatant stealing may be ending.

“They are getting better at concealing what they are doing,” said Anderson. “They are better at wiping their footprints.”

Referring to the general lack of enforcement, Anderson said victim companies often don’t get into the “deep and expensive” process of ensuring security because of cost, and the possibility of going up against the monetary might of a nation state.

Sleeper cells dedicated to espionage, with students infiltrating companies were also mentioned. Montgomery spoke from personal experience, saying that gets emails from Chinese postdoctoral students offering to work for free.

The magnitude of wealth transfer was also touched upon by the panel.

“It’s almost impossible to quantify but when we try, it’s horrifying,” Anderson said. “You’re talking in the trillions.”

Though the possibility of a solution was touched upon, its difficulty was acknowledged by the panel.

“It’s been difficult since the Snowden days for companies to trust the government,” said Anderson.

He called for countries to build disincentives into the system, while the panel also considered companies doing vigilante enforcement of IP. The consensus was that the problem was slowly getting out of hand.

“We should know that the longer we have them, the more we fall behind,” said Anderson.