The Simplicity Behind Complexity 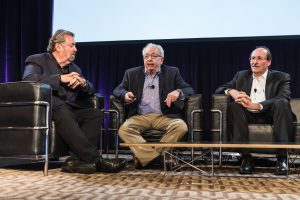 Through time, the human understanding of the universe has grown increasingly sophisticated. The intervention of the gods is no longer a scientific causal explanation of the world and what is happening in it, the enlightenment changes that. Further, no longer do we believe in the clockwork universe, whereby all things can be predicted with certainty if we understand mechanism by which they work. In this late afternoon session, Mark Anderson, Murray Cantor and Brad Holtz explored our current understanding of the universe through the lens of a number of examples from disparate fields.

We currently understand the universe to be an unpredictable system in which true predictions are not possible, but some level of statistical probability may be understood. In this model, tiny variations in conditions can dramatically affect outcomes.

Cantor offered Conway’s Game of Life is an example of this phenomenon. By very slightly altering the initial conditions of the model, a dramatic difference in outcome can be observed.

Holtz offered another example of fractals. Fractals are observed as mathematical models produce patterns, which recur at progressively smaller scales. Upon “zooming in” on these fractals by a factor of 10^40, tiny variations in conditions can produce very dramatic results.

These same principles are demonstrated in genetics. Cantor said that although most living things have very similar DNA patterns, tiny variations in those proteins can produce wildly different organisms.

“Anything that changes in time, these are the fundamental laws that apply,” Cantor said.

Anderson said that the key to understanding the nature of these systems is understanding the flow and interaction between variables to help determine patterns. He showed Lorentz’s Butterfly as an example, emphasizing that if we only look at the change on one axis of the model, there appears to be little to no discernible pattern.

However, simultaneously examining the change across all three axes of motion leads to a pattern emerging, giving us a chance of predicting where the particle being observed might be at any point in time. Holtz explain this method further.

These simple models, although relatively simple, give rise to enormous complexity. The panel concluded that only once we begin to understand the flow and interactivity in the system can we begin to predict system behavior.