“The Most Important Talk Ever Given” 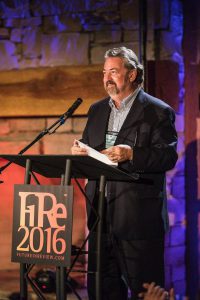 The ideas of flow and interaction are fundamental drivers of the world and with them, we describe everything, said Mark Anderson, Founder and CEO of the Strategic News Service(SNS).

The speech was delivered at the opening night dinner of the Future in Review 2016 conference. The SNS looks for patterns in all industries and helps companies avoid pitfalls. Anderson said that he is often asked if there was something deeper they were seeing in their analysis. He said that he had said no until now.

Paraphrasing the poet Dylan Thomas, he said, “We knew everything about patterns, except why. I think we’ve found it.”

Anderson said that when he discovered the idea of flows, he asked many people if flows could explain their understanding of the world, and they agreed. Speaking about the lack of precision in language, he said that language colors perception of the world and math is a language. He concluded saying that flows and interaction will change language, change math, and change perception.

“[People will] describe and study the world in its own terms,” he said. “I hope our language (will) become a mirror of the world.”

To discover more or read other articles from the conference, visit our Medium blog.