The CTO Challenge Team Reports Back 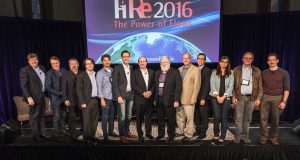 Team members of the 2016 CTO challenge reported back on their progress to the judges at the closing Friday session of FiRe Conference. The team had been tasked with building a flow computer system that can also measure the energy flow of the Earth.

Nathanael Miller, an aerospace engineer at NASA and spokesperson for the team walked the judges through the work done so far. He said it was a “a treat for all of us to work through the night to get the presentation together.”

Miller said that when analyzing the assignment placed before them, they changed the challenge from only being a flow system to also be an interactive system.

Ben Brown, department head at Molecular Ecosystems Biology, explained the system at its most basic. The steps will include sensing the data, routing, aggregating, identifying a flow/pattern, and then using, interacting, and/or archiving the data.

Franklin Williams, a principal at Live Earth Imaging Inc said that to make the system buildable in a timely manner, they suggested using sensors already in place. They would place their own aggregators on the sensors.

“[There are] Millions of sensors out there,” he said. “We just need to pull them into the system.”

Once they have data and flows, they can determine what holes exist in the knowledge. Then they can build their own sensors. Williams said that after the first iteration, they can drive the problem backward.

Miller said they hope the system they design will allow variability in what it can do. It can be used by a kid in his garage or a Fortune 500 company.

The judges were asked if they would vote up or down for this project. They all voted up except Ty Carlson, CTO at Coventry Computer, who voted up with an asterisk.

“The impact that we have here is pretty significant,” Carlson said. “This is a human surveillance system that you have basically provided.”

“Does everyone understand the significance of the design?” he asked.

Miller said those were all things they were including in their discussions.

“We want to make this data as useful as possible to better life on earth,” said David Zuniga, a commercial innovation manager at the Center for the Advancement of Science in Space.