Half of the total set of FiRestarter companies were introduced and briefly interviewed by Ed Butler ahead of this evening’s FiRestarter reception.

Don Straus, CEO, CSO of First Light Biosciences introduced the company, which began with Straus’ concern with the rise of superbugs and antibiotic resistance. Straus saw a need for a rapid test for infection instead of the standard petri-dish growth method, which can take up to four days. First Light’s test will take four hours, use any type of biological sample, and detect a broad variety of pathogens and toxins beyond just bacteria, all done with a cheap digital camera. “Unless we do something, we may be approaching a post antibiotic world,” said Straus, as antibiotic resistance is progressing more quickly than we are developing new drugs. First Light Biosciences anticipates being on the market in approximately two years. 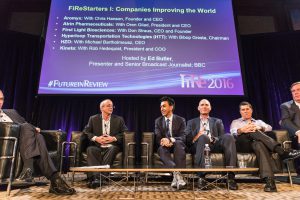 Oren Gilad, is the CEO of Atrin Pharmaceuticals, which has developed a highly targeted anticancer drug with none of the side effects of chemotherapy. Atrin has tested their drug in vivo with ovarian, colon, and pancreatic cancer in addition to several others that are still being tested in vitro, including prostate cancer. They have had several promising trials in humans and anticipate being on the market in about a year. “The drug is working beautifully,” said Gilad, “It’s very specific to the target and doesn’t touch any other proteins”

Founder and CEO Chris Hanson describes his company Aromyx as developing a method to digitize taste and smell. It is a simple, plate based method for companies to measure a taste or a smell, especially in the food and beverage industry. “We think finally being able to measure a taste or a smell will allow these industries to automate a lot of their processes” said Hanson.

Kineta, a company based out of Seattle was introduced by COO and President Rob Hedequist. It works in the translational drug development space to streamline taking drugs from the development stage through to safety studies and eventually onto the market. Hedequist touched on several ongoing and upcoming projects being undertaken, including a non-opiod, non-addictive treatments for chronic pain and a new NIH grant to work on a treatment for the Zika virus. “We have built a robust platform,” said Hedequist.

Draper, UT based company HZO was introduced by CEO Michael Bartholomeusz. HZO has developed a “robust, scalable and economically viable” method for protecting electronics from the environment from the inside-out, particularly waterproofing. It’s is working with several large electronics companies, including Motorola, and Bartholomeusz said that this is the “final frontier in technology development,”

Hyperloop Technologies was introduced by Chairman and COO Bibop Gresta. The Hyperloop is the concept of high speed transportation of goods and people through tubes similar to the tubes at a drive through bank teller window. Hyperloop hopes to begin construction in the US in the near future but is open to other markets as well. “We are super proud to be an American company.” Gresta said, “We want to fix transportation here at home.”