Film as a Change Agent 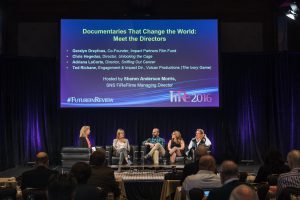 The fourth breakout session on day two of the Future in Review 2016 conference was titled  “Documentaries That Change the World: Meet the Directors,” where moderator Sharon Anderson Morris introduced the audience to series of high impact directors and films. The discussion dovetailed around the films and the motivations of the filmmakers.

Chris Hegedus, director of animal rights documentary “Unlocking the Cage” started with discussing her 2001 movie Startup.com. She described entrepreneurs “going into the wild west” of ideas and coming our rich. It follows the boom and bust cycle of the startup bubble around the turn of the century.

It was followed by a trailer of “Unlocking the Cage,” the story of lawyer Stephen Wise’s attempts to grant animals greater rights through a sustained litigation strategy.

“Unlocking the Cage was an exceptionally special film for me,” Hegedus said.

She said that she hoped that the audience of the film also treated animals with respect and kindness. Further, she emphasized the importance of spreading the message further and mentioned the her team’s attempts to get into 250 law schools around the country.

The second film showcased was “The Ivory Game,” produced by Paul Allen’s Vulcan Productions. Director Ted Richane explained how the film was part of Allen’s three-pronged vision of philanthropy, including collecting data, pushing legislation, and storytelling. He also said that the film approached the ivory trade from a different angle that doesn’t involve the supply of animals in Africa.

“There’s a lot of films out there about elephants,” he said. “This…looks at the ivory market and the trade.”

He also said that the consequences of the ivory trade go beyond dead elephants.

“We need to make sure people understand that it’s not just a numbers issue,” he said. “When an elephant is lost from the herd, it has an emotional impact to the other elephants in the herd.”

“Unlocking the Cage” is a Netflix Original, and releases on November 4th.

The third film showcased was “Sniffing Out Cancer,” a documentary about the research showing that dogs are excellent pre-screening agents for up to 11 cancers. Director Adriana LaCorte spoke of her background in reality television, and wanting to do something meatier, especially after multiple close personal deaths.

As the film is low-budget, LaCorte asked for help finishing the film. She also said she wants more doctors to see the numbers and see all the research has been done, and felt confident that people will get behind this very early stage, non-invasive, pain-free method of pre-screening.

“Films are the lingua franca of our era,” she said.

Mentioning the three to five year length of production and costs of beyond a million dollars, she

debunked the myth that having access to technology is enough. Connecting filmmaking with philanthropy, she spoke about the various methods of financing, like grants and private equity.

“People are starting to understand that in philanthropy, ideas are disruptive,” she said.