Digitalization, the Cloud, and the Transformation of the 21st Century 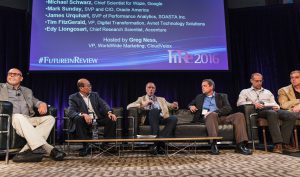 The emerging trend of digitalization is blurring the line between the physical and digital world. The dramatic reduction in the cost of data collection, storage and analysis in the last several years has opened the door for this change, and it’s changing the nature of business. Greg Ness guided a discussion panel on the consequences of digitalization on Day 2 of the Future in Review 2016 conference. Preston McAfee, Michael Schwarz, Mark Sunday, Tim Fitzgerald, James Urquhart, and Edy Liongosari were also present as panel members. Their responses have been aggregated below.

So what precisely is digitalization, and what does it mean for large enterprise? Its definition has changed over time. The dramatic reduction in the cost of data services is impacting the way that we conduct business. Furthermore, the dramatic change in connectivity is driving change. This ability to capture data in real time from multiple sources enables us to react in real time. This increased flow of data between the physical and digital world is at the core of digitalization.

This increased flow has the potential to drastically change industries, some perhaps more than others. Potentially there is no limit to which industries can apply this idea. Agriculture is one example, where the monitoring of moisture levels can dramatically reduce water usage and increase relative yields. The mass collection of data will allow for macro-analysis, which can the be micro-targeted down to individuals based on their specific needs. These sort of “personal plans” will permeate many industries. Digitalization will also change the organizational structure of firms. To be used effectively, digitalization efforts will have to be embedded in all functional areas of a business, not siloed in one department. The bottom-line is this: digitalization is happening. Those firms that choose to get in front of the wave will prosper.

This begs the question: Who is working in this space now? General Electric is a great example of a firm who is adapting well. Seemingly overnight they transformed from a hardware company to a software company, and are now collecting enormous amounts of data on their equipment. Another consequence of this flow is cloud computing, which is being used to allow firms to fail fast in innovation. In this environment, the slow movers will be damaged quickly. Perhaps more quickly than ever before. It’s important to remember that although digitalization may spell big changes for the way that companies do business, it’s likely that consumers will not experience life changing effects.

Something that cloud computing allows is collaborative filtering, whereby data sets and patterns are developed by millions of users but are accessible at a personal level. This is the biggest change for consumers. Cloud computing and mobile connections enable this. Furthermore, machine learning applications in voice, picture, and video digitalization are changing the applications of cloud computing.

One form of digitalization not often mentioned is the digitalization of human assets. Through this process, it will become possible to select an ideal candidate for a job based on their digital profile, or to select the best customer type from a group of potential customers. Additionally, this process may have a “flow” effect, whereby the network created by human digitalization will allow us to seek out particularly useful contacts for a project or position.

This digitalization may drive longitudinal change through the rest of the decade. Thought to text and universal language translation will may be the biggest change makers, probably by the end of the decade. These technologies will change the nature of human interaction and increase the digitalization speed of human assets tremendously. The organizational structure of firms may begin to change as well.