Bridging the gap between innovation and economic growth 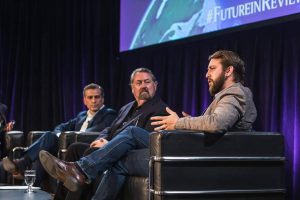 National GDP and national business models, are a derivative of the business models of individual companies within the economy. Bill Ribaudo, Managing Partner of Technology, Media and Telecommunications at Deloitte, Mark Anderson, CEO at Strategic News Service, and Evan Anderson, Director of Research at INVNT/IP; elaborated on how types of business models correlate with national economic growth throughout the world.

Evan Anderson provided supporting research for Ribaudo’s claim. Anderson’s team compiled data that correlates innovation metrics with national GDP, yielding an index of countries positioned for high to low rates of growth. Among the highest ranking countries were Switzerland, the United States, and the Netherlands. Among the lowest were Mexico, Indonesia, and India.

The implication for policymakers is that when faced with budget allocation decisions, one should consider the multiplier effect of the industries into which capital is flowing.

“We’re in an age of technology we’ve never been in before,” added Mark Anderson. “By acquiring intellectual property rather than developing it, companies and nations are losing the longer-term, exponential growth that is within reach.”