The Market Has Changed It’s Behavior, Have You? 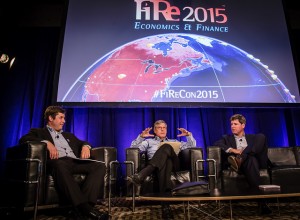 Keiretsu Forum’s Nathan McDonald sat down with Yahoo CFO Ken Goldman and Harris & Harris Group CEO Doug Jamison to talk about investing today. One thing is for sure, this ain’t the 90’s.

Goldman noted that in the late 1990s the tech market, characterized by the dotcom bubble, stood in stark relief to today’s more rational market behavior. He sees an increased focus on fundamentals, a sense of discipline which makes it harder to take companies public. While Goldman noted that the presence of roughly 120 unicorns in the market has led to some overvaluation, the structure of valuation itself has shifted. While capital is in high supply, fewer companies have venture arms today. He noted that most of the money is coming from the hedge and mutual funds, and the big ones; Blackrock, Fidelity, and T. Row Price.

Further, Goldman explained that much of the valuation increases today occur while companies are private, a reversal from previous valuation patterns. Public companies just aren’t seeing the increases they used to.

Doug Jamison noted that after the dotcom bust, sub-50 million dollar IPOs have faded away. This fundamentally changes structure of market. Jamison noted that the challenge of unicorns is their allure; they suck money from smaller firms, often those involved in complex but critical deep-science innovation. Jamison stated a clear concern for this loss of diversification, noting “My thinking is…is that good for the market?”

Goldman pointed out further concerns in modern investment. He noted that venture has been a great asset class for endowments, but that volatile investments are also a result. Noted Goldman, “I was talking to a banker friend of mine, and he was saying ‘With an IPO, guys would do three months of due diligence. With these late stage private investments, they’re doing 2 weeks.” In other words, then, the difference in discipline between public and late-stage private is unbelievable. Goldman also raised concerns that companies who start to miss their numbers in these hyped private deals end up risking their ability to go public.

Doug Jamison highlighted the amount of legitimate valuation in the market, stating “If you parse the system, there are a lot of companies where valuations are not inaccurate.” He noted that companies, particularly those in the life sciences and energy fields, have suffered a downturn in valuation that also places them in more stable and accurate territory. Citing the shift of capital from limited partnerships towards a smaller subset, Jamison pointed out that if this is a rearrangement, it could be positive and disruptive. If the contraction is more long term, however, the diversification decrease will close the doors on deserving investments.

Goldman also noted that the number of parallel tech trends today is high, with 8 or 9 disruptive fields emerging now. While noting that most companies have business models that make sense long term (an improvement on the many companies in 2000 who had no business or revenue model to speak of) Goldman pointed out that things don’t go up and to the right forever. It is still difficult to see whether some of the valuations we see today really make sense.

When asked about crowdfunding as a disruptive way to raise capital in modern investing, both men expressed concern. Goldman noted problems with investing without long term commitment and knowledge, highlighting a lack of just reinforcement for long term investments in the crowfunding world. Jamison agreed, stating that while the democracy of investment brought by crowdfunding was good in the short term, investing isn’t solely about the money. He stated similar concerns with long-term investments, noting that “Invesment is like playing poker, but you get to count the cards.” If you can take in info and measure probability, you benefit. This may be lost in short-term crowfunding. As an example, Jamison queried, “Take drug trials, what crowdfunding body will be there 7 years in?” In terms of quick-to-market investments however, Jamison sees crowdfuning as a beneficial model.

Generally, then, both experts see secondary markets to capital as both an emerging realm of threat and possibility. However, the overall sentiment was troubled in regards to these sources of capital, with Jamison stating “We need secondary markets, but I just don’t see the demand”, while Goldman worried that such tools provided executives with a mechanism to take money off the table, asking “Can senior executives get distracted by not being hungry enough to go public, and therefore not be well aligned with investors?”

As for what is undervalued? Jamison sees a phenomenon in which Biotech firms have taken up much of the investment capital and left many sectors behind. Top of the list: IoT hardware firms.