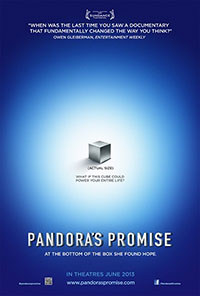 A Strategic News Service (SNS) member and longtime Future in Review (FiRe) Conference participant has provided a grant to bring the controversial film “Pandora’s Promise,” first aired in pre-release form at the 2013 FiRe Conference, to Australia. Oscar-nominated director and environmentalist Robert Stone recently presented the film to the audience of major technology and thought leaders at Future in Review 2013.

Each year, the FiReFilms team carefully selects a world-changing documentary film to bring to the attention of the SNS and FiRe network to help filmmakers achieve their goals “from completion to distribution to solution,” as a powerful tool for world and social improvement.

“We chose ‘Pandora’s Promise’ for its power as a conduit to inspire our unique convergence of FiRe thought leaders to explore that most imminent topic in all of our lives: the future of energy itself. We couldn’t be more pleased with our success in that mission, as further evidenced by this generous grant,” said Sharon Anderson-Morris, Managing Director of the FiReFilms team.

“Pandora’s Promise” is a feature-length documentary that explores why mankind’s most feared and controversial technological discovery — nuclear power — is now passionately embraced by many of those who once led the charge against it. The film is anchored around the personal narratives of a number of leading former anti-nuclear activists and scientists who, in the face of considerable controversy, are directly challenging the anti-nuclear orthodoxy that is a founding tenet of the mainstream environmental movement.

“We hope this film will continue to inspire conversations around the topic of whether future, safer nuclear energy designs should be used to reduce CO2 production. We need to take bold new steps to arrest the global warming catastrophe already under way, but we also need to be mindful of the terrific risks that occur when nuclear technology, natural disasters and human nature collide,” said Mark Anderson, FiRe Chair and SNS CEO, who prefaced the film’s showing at FiRe with a cautionary discussion on Chernobyl statistics and the promise of non-nuclear alternative energy sources.

Future in Review is an annual gathering of world-class thought leaders in technology and economics, convened each year with the goals of providing the best look forward in these fields, and of using technology to solve major world challenges. These goals have been consistently achieved through FiRe’s collaboration across disparate industries and through active support from the FiRe community. Next year, FiRe will be held May 20-23 at the Montage Laguna Beach, California.

To register for FiRe 2014, and to see the FiRe 2013 agenda and bios of participants and selected speakers, go to www.futureinreview.com.