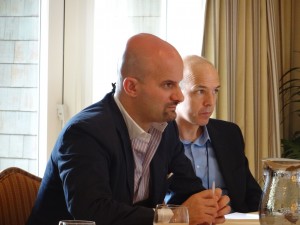 “Energy futures are primarily an infrastructure play,” according to Craig Wilkins, President of Zinc Air.  Wilkins, along with Stefano Poli, CEO of Electro Power Systems, was co-moderator of today’s FiRe Breakout Session.  Topics of discussion included the concept of the micro grid, the challenges of infrastructure improvement and load reach to remote areas, load loss, and the role that alternative energy and storage capacities play in improving energy efficiency and delivery.

Most panelists agreed, noting that the current power grid usually loses anywhere from 30-40% falling off the end due to the demand/pull system.  “We’re putting all this carbon out there that we know we don’t want, to generate energy without getting the full value of it,” commented futurist Brenda Cooper.

Micro grids may offer an alternative answer to the outdated grid systems of developed countries and the lack of adequate grid infrastructure in developing countries.  “A micro grid is essentially a localized power system that you have built for a town or area which is not tied to the national grid at large,” said Wilkins. “Throw up a wind turbine and a battery hooked to the base of it and you’ve got yourself a micro grid.”

According to Stefano Poli, a mixed model may be possible.  “The model I foresee is a combination.  In developing countries such as Europe and North America, it is more a matter of using energy in a smart way – store energy when it is cheap and use stored energy when it is expensive.  I’d also like to make a point about the perspective outside of the U.S.  It is interesting to look at China and India.  China is heavily invested in electric transmission infrastructure plays and, although looking at micro grids, are not very excited about them.  India, however, is pushing the micro grid concept as they see a big opportunity and already have projects underway.”

Storage of energy and the challenge of tying alternative resources to the current grid remain major issues.  “No companies out there are taking large-scale energy storage risks,” said Wilkins. Utilities are struggling to integrate alternative energy sources, often finding that they cannot run over 18-22% of alternative energy on the existing grid because it’s unstable.  According to John Lowell, VP of Zinc Air, “You have to come up with a way to control it – using storage, software, or big data.  The brutal truth is this – it’s still cheaper today to generate and throw away than to store and reuse energy.”