Centerpiece Conversation with Paul Jacobs, Chairman, Board of Directors; and CEO, Qualcomm; hosted by Mark Anderson 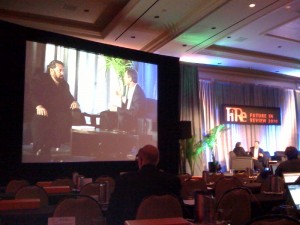 Managing privacy aspects in social networks is going to be very fine-grained.

Jacobs says the next form factor: an in-between sized mobile device you can carry around with you that accesses your PC content.

Mark: There will be a new human interactive process that uses real-time computer assists for the demonstration, using gestures.

Paul: Looking for the day when you can automatically share documents with all members of a meeting; sent directly to their tablets.

There will be a difference between vertical wall computing screens and hand-held screens.

The Future of Snapdragon

Higher processor rate, clock rates, more cores, going into higher and higher level computing. We can scale clock rates of different cores up and down. Today, stuff doesn’t jitter. When you start going down to smaller and smaller geometries, your capabilities decrease.

“It’s a platform for innovation. We’re just going to keep stuffing as much stuff into it as we can,” says Jacobs of Snapdragon.

Qualcomm’s Move From Computers to Screens

Realized a few years ago that more and more power was going into screens, so invested and bought a company working on MEMS screens. Mechanical refractory index changer.

Now, they have a company in Taiwan. 5.2 inch screens, not affected by sunlight, should be out this year.

Today, phones look like they’re dead. In the future they’re going to be live.

Ty Carlson re; Mediaflow. Where are you taking it, what’s the business model?

Currently, cable TV on your phone. Originally designed to be content caching, etc, but Qualcomm underperformed.

Sailesh Chutani re: What’s Qualcomm doing to solve the issue of peripherals?

Bluetooth allows you to have peripherals to a phone, but the question is how willing people are to carry them around?

Scott Gardner re: Intel. Whats happening with Atom vs. ARM

Intel has windows and software equisystem as its advantages; having to make investments into software ecosystems.

Qualcomm spends 100% of their time driving innovation, whereas Intel has to worry about filling their fab.