NVIDIA is investing in 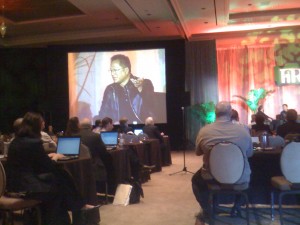 a. Parallel computing; using simulations and algorithms rather than photos to simulate special effects

Currently, the PC is at a pause, but it will be revolutionized and refreshed again. Developers around the world will redesign the purpose and capabilities of the computer.

NVIDIA is creating the next fastest supercomputer in the world; parallel computer architecture that will delivers 1000x the speed

Results of this: computers that see you or computer vision, “photoshop that refocuses”, 3D technology in computing

Mark says, “This is beyond Avatar”

Moves processing from behind the keyboard to behind the screen, allowing for implementation in tablets, etc.

Most computer users use computing for leisure– a far bigger market than enterprise, school computing.

On Security and IP

Rethinking IP as people, knowledge and ideas, rather than WHAT they produce.

If GPU is being used to hack, it should be used to encrypt as well.

“We’re investing a lot in remote rendering . . . You can use the cloud to render whatever application you see.”

Encrypting with a GPU in real-time. CPUs take too long.

In response to T.A. McCann’s question on NVIDIA Success and Workplace Culture

“You have to develop an institutional tolerance for failure . . . I don’t want to fail, but the journey is important. When you’re taking the journey to a certain place, you’ll likely fail often.”