Broadband has been looked at as the “dumb pipe” but it has suddenly become more important, because of glass. Once you have it to the home, you’re going to want it whenever and where ever you are.

South Korea and Japan are going to be the two biggest leaders in fiber to the home. Smaller countries like Qatar are also going there, purchasing qtel. 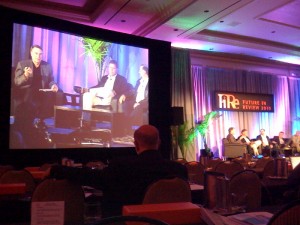 More and more nodes are being connected, in Nike sportswear and band-aids, linking objects, not just machines with wireless.

Australia is a year into their 8-year broadband implementation.

Today it’s all about price, but 10 years from now it will be all about access and speed.

How do you future proof the largest infrastructure project in Australia’s history? $45 billion. The US is putting in 1% of the investment.

Chris Hancock: The researcher in Australia is currently getting between 1-10 mg from AARnet. 1o years out they’ll be getting far more.

Looking to move from 36 satellite dishes to about 5000 across Australia that requires big pipes (1 million mbps) to operate.

a. government proposal to institute web censorship; legislation is currently being drafted to restrict the access to certain URLs by Australians. this is very worrisome due to its implications for democracy and the dangerous precedent it could set in terms of a nationalized broadband model.

How will NBN change the physical isolation of Australia?

Simon Hackett: allows telepresence and communication between every  home.

Developments in the next year: sharp audio quality.

The NBN: It’s been a great vision, and it’s the right vision. But the building part is going to be hard.

Currently, office buildings have dead walls all over instead of electric walls. Larry Smarr: “That is going to change and that will change everything.”

Rather than the NBN being a telephone, it’s a platform and telecom doesn’t own it. The gov’t owns it. Rather than companies, having to pay for pipes, they can concentrate on services. How does that change things?

Bridging the hurdle of convincing decisionmakers to understand the power of broadband as a tool of empowerment for creators.