You may have noticed that the big banks have been reporting upbeat “earnings” figures in recent days. Just yesterday, Bank of America reported a staggering $4.2 billion in first quarter “earnings.” But it’s share price declined by an also staggering 24% What’s up? Surely investors saw the impressive “earnings” numbers. Of course they did. Which is why Bank of America’s share price went down. Those “earnings” are just more of the financial gimmickry that got us into this financial crisis. Bank of America’s deposit base (excluding acquisitions) actually declined and defaults on every kind of loan increased sharply. Its credit card division lost $1.8 billion; it’s mortgage division lost $500 million. But it resorted to every trick in the book to manufacture “earnings.”

Can anyone explain to me why Ken Lewis is still chairman and CEO of Bank of America?

This is starting to feel like amateur hour for aspiring magicians.

Another day, another attempt by a Wall Street bank to pull a bunny out of the hat, showing off an earnings report that it hopes will elicit oohs and aahs from the market. Goldman Sachs, JPMorgan Chase, Citigroup and, on Monday, Bank of America all tried to wow their audiences with what appeared to be — presto! — better-than-expected numbers.But in each case, investors spotted the attempts at sleight of hand, and didn’t buy it for a second.

Goldman Sachs even made an entire month disappear. In the course of changing its fiscal year, Goldman left behind an “orphaned” December 2008 which just happened to include $1.5 billion in losses. (As the Church Lady would say, “How convenient.”) Bank of America, Citigroup and JPMorgan Chase all booked gains from the decline in the value of their bonds. (Funny how that works – the banks’ debtors think their odds of defaulting have increased and that results in an increase in paper profits for the banks.)

This is all part of a campaign on the part of the big banks to convince the world that they really are solvent and that they can survive without government funds (while they hope that a recovering economy eventually bails them out).

Some bank CEOs have been whining lately about having been “forced” by Bush’s Treasury secretary – former Goldman Sachs CEO Paulson – to take TARP funds (i.e., equity infusions) from the Federal government last fall as the global financial system was melting down. They didn’t express their concerns back then when their survival was at stake. Rather, it was subsequent threats to their seven and eight figure bonuses (and government success in stabilizing the financial system) that prompted this new distain for government help.

(To some Republicans in Congress, and assorted teabagging wingnuts around the country, it has somehow become Obama who “forced” the banks to take bailout funds and any actual or proposed restraints on banks that have received tens of billions of dollars of taxpayer aid is evidence of his “socialism” or even “fascism”.)

Of course, if the bank CEOs were more concerned about their shareholders than about restrictions on their compensation, they would presumably want to maintain strong balance sheets for the (still real) possibility of worse times ahead. But they have never shown any particular concern for the long-term interests of their shareholders.

Lately, Goldman has been leading a PR campaign intended to allow them to get out from under TARP restrictions. Recall, Goldman received extraordinary permission to convert from a relatively-unregulated investment bank to a heavily-regulated bank holding company precisely so that they could avail themselves of the federal bailout. (It’s a nice trick – enjoy the benefits of being an investment bank when times are flush and there is huge money to be made, and then convert to being a commercial bank holding company when the whole system melts down. Sort of like being allowed to buy a fire insurance policy after your house is in flames.) They have even raised $5 billion as evidence that they no longer need the federal funds. But that would actually seem to be evidence that they needed the federal funds. As former Bush Treasury Secretary Paul O’Neill pointed out, “If banks now claim they want to return the money because they don’t need it, why do they have to raise new capital to replace the money from we the people in order to repay the government?”

Goldman received “only” $10 billion in TARP funds. But they also received $13 billion in payments from the AIG bailout, which they are not proposing to pay back. (Goldman claims that they were fully hedged against their losses as an AIG counterparty and that, therefore, they didn’t need AIG bailout funds. Which, of course, raises the question as to why they received those funds – which the public was led to believe were required to avoid the “systemic risk” of losses to counterparties. If Goldman was fully hedged against losses from AIG, then presumably there was no systemic risk to justify those payments. It also raises the question whether Goldman hedged in a manner that resulted in them being paid twice for the same exposure to AIG. No one is saying – certainly not Goldman. Alan Abelson in Barron’s raises the possibility that those AIG funds may account for part of Goldman’s recent “earnings.” There has been absolutely no transparency on these issues, so we really don’t know. But that is the subject for a separate post.)

The Goldman bailout doesn’t stop just with the TARP funds and the AIG counterparty payments. As the New York Times noted in a good piece last week, the ability of Goldman and other banks to access the credit markets is a result of their ability to tap into the AAA credit rating of the federal government. Goldman alone has issued over $28 billion in FDIC-backed bonds. Needless to say, they aren’t proposing to pay off those bonds and let the taxpayers off the hook for their guarantee.

From the New York Times piece:

Eager to escape the long arm of government, Goldman Sachs is preparing to return $10 billion in taxpayer funds as fast as the ink can dry on the check. But the bank, and a number of others, is quietly holding on to other forms of public support that come with virtually no strings attached.

Banks have been benefiting from an indirect subsidy adopted by the federal government at the height of the financial crisis last fall that allows them to issue their debt cheaply with the backing of the Federal Deposit Insurance Corporation.

That debt — more than $300 billion for the banking industry so far — helped otherwise cash-strained banks to keep their businesses running even when it was virtually impossible for other companies to raise funds. The program will continue to bolster scores of banks through at least the middle of 2012.

The value of the assistance, economists say, is incalculable, because it helped keep participating banks alive despite the panic sown in financial markets after Lehman Brothers collapsed.

“I don’t know how you measure that subsidy,” said Mark Zandi, the chief economist

The program has allowed Goldman to issue $28 billion in debt over the last six months. The debt totals more than $40 billion each for Bank of America and JPMorgan Chase, and $23 billion for Morgan Stanley.

The F.D.I.C. program does not come with the compensation and other regulatory conditions attached by Congress to the $700 billion bailout, but it charges the banks a small fee. Rather than relying on a direct infusion of taxpayer money, the agency is helping the banks raise debt from private investors by endowing them with the equivalent of an AAA rating. If any of the banks relying on the guarantees ran into trouble, the F.D.I.C. would make good on those bonds. …

Goldman was the first bank to take advantage of the debt program when it was introduced in November, when the financial crisis made it nearly impossible for companies to raise cash. Morgan Stanley and Citigroup were quick to follow. More than 119 debt deals have been issued with the F.D.I.C.’s backing, according to Dealogic. Larger banks are using the program more than smaller ones, because they have capital markets businesses that depend on financing in the public markets.

Bank executives are quick to acknowledge that the program was critical to their survival.

“We would have had a real problem in the capital markets,” said David A. Viniar, the chief financial officer of Goldman. “The market shut down.”

I am picking on Goldman here because they have taken the lead in elevating these issues and seemed the most determined to get out from under the TARP restrictions. (And because it was their own former CEO, Paulson, who gave them the money in the first place. And it was another Goldman guy, Neel Kashkari who has been administering the TARP program.) But the same points apply to other banks. The irresponsibility of these banks has cost taxpayers and the Fed trillions of dollars in equity infusions, loans and guarantees. According to Bloomberg all these forms of assistance now total almost $13 TRILLION – almost equal to annual US GDP.

The truly amazing thing is that the banks haven’t been able to generate REAL earnings despite a $13 trillion bailout. From the Sorkin piece:

What’s particularly puzzling is why the banks don’t just try to make some money the old-fashioned way. After all, earning it, if you could call it that, has never been easier with a business model sponsored by the federal government. That’s the one in which Uncle Sam and we taxpayers are offering the banks dirt-cheap money, which they can turn around and lend at much higher rates.“If the federal government let me borrow money at zero percent interest, and then lend it out at 4 to 12 percent interest, even I could make a profit,” said Professor Finkelstein of the Tuck School. “And if a college professor can make money in banking in 2009, what should we expect from the highly paid C.E.O.’s that populate corner offices?”

(Remind me again why Ken Lewis is still running Bank of America?) 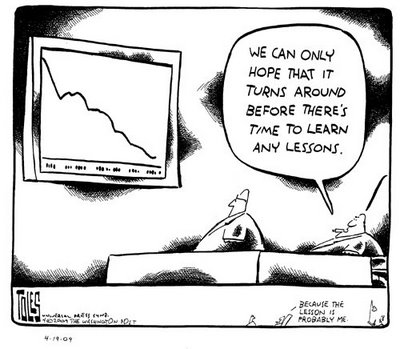 We can’t let these banks off the hook as soon as the immediate crisis shows signs of stabilizing somewhat. The federal government continues to be lax on the banks. Metaphorically speaking, the federal government should keep its foot on their throats until we have put in place a new regulatory regime that ensures the crisis isn’t repeated a few years down the road. We can’t return to a world where the financial sector sucks up 40% of all the earnings in the economy through essentially infinite leverage while creating little of actual value for the economy. This is just casino capitalism where the gains are privitized and the losses are socialized (leaving us with the worst of both systems).