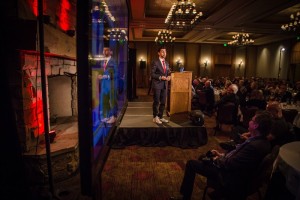 Bibop Gresta’s name, fun as it is to say, was perhaps the least interesting thing about him to the crowd gathered at the Future in Review technology conference in Park City, Utah, Friday night. The international Italian VC also happens to be a former pop star, who claims on his LinkedIn profile to have become a software development director by the time he turned 15.

But Gresta is most fascinating as the Deputy Chairman, COO and Chief Bibop Officer (as would befit his trendy white sneakers) at Hyperloop Transportation Technologies. The company, guided by Elon Musk’s open-sourced mass transportation design, has been working on developing the technology since 2013. That’s when CEO Dirk Ahlborn posted the idea to his startup crowdsourcing site, JumpStarter. The following year he met Gresta at a Los Angeles event. Gresta quickly jumped onboard.

Just two years later, with plenty of crowdsourced input from JumpStarter users, Hyperloop Transportation Technologies has plans to break ground on its first stretch of tube in 2016.

Hyperloop passengers will travel in pressurized capsules, levitated on an air cushion inside of a reduced-pressure tube. Eventually, the craft will travel at speeds of up to 760 mph, although Gresta said Friday that the only time passengers would feel the gravitational force is during starts and stops. Aerodynamics, he explained, make windows impossible, but high-res screens inside each capsule will show what’s going by outside in real-time if you like. And there will be no lying down uncomfortably during the journey. Gresta described the passenger experience as plane-like.

“We are building it on completely renewable energy,” he announced, citing solar panels planned for the top of the tube, kinetic energy to reclaim wind movement, regenerative breaking and geothermal energy. A Hyperloop line between San Francisco and Los Angeles, he predicted, will cost at most $10 billion to build and will be able to transport 3,400 people an hour — 67,000 each day.

Laying high-speed rail along the same route would cost $68 billion, forty percent of which Gresta attributed to the cost of clearing the right-of-way. The Hyperloop, built on 5-foot pylons spaced 400-feet apart, won’t have that challenge.

One of the project’s biggest assets is the willingness of its team to forego pay — 450 top engineers from 21 nations have traded $11,000,000 in man hours in exchange for stock.

To avoid dealing with government regulations and citizen pushback, that first stretch of tube will be built as part of Quay Valley, CA — a proposed 750,000 person solar-powered development in the middle of California’s San Joaquin Valley. Early testers of the technology won’t be traveling at full-speed. The Quay Valley tube will be an exploratory eight kilometers long, limiting capsule speeds to ‘just’ 360 mph.

“We will [still] smoke the Japanese high-speed rail,” Gresta smirked.

The Quay Valley development itself has been stalled twice since 2007, mired by economic downturn and legal battles over water rights. (Quay Hayes, the Los Angeles real estate developer behind the project has left behind a connect-the-dots of failed and bankrupted companies.)

But even if Hayes goes belly-up again, one gets the feeling that Hyperloop Transportation Technologies will be just fine.

“Im a pessimist on seeing the first Hyperloop in America, honestly,” Gresta said Friday, citing legal and regulatory challenges. There are plenty of other countries, he explained, that would be happy to draw a straight line between two points and simply clear the right-of-way for Hyperloop development. Hyperloop Transportation Technologies is already talking to four other interested nations.

Beyond that? Gresta sees a successful Hyperloop revolutionizing industries like freight and medical transport and said the company is in talks with the Port of Los Angeles, the Port of Singapore and twenty-one others.

“We are not having the technology yet to go underwater, but we are working on it,” he joked.