[Ed: view the original article by David Brin below.]

I agree with your general point: The US has been unique among great empires in consciously adopting a counter-mercantile model to aid the development of other countries post-WWII. Along with the establishment of a web of international institutions, that led to unprecedented era of global stability and relative peace. That model made sense in the aftermath of WWII when most other major industrial economies had been destroyed by war. It makes less sense now for reasons I will outline below.

You state: “… Marshall designed the ultimately victorious policy of patient containment of the USSR until, after many decades, that mad fever broke. (Certainly, he deserves at least as much credit as Ronald Reagan.) ”

Of course, you are right that primary credit for the US “victory” in the Cold War came from the bipartisan policy of containment started by Truman, Keenan and Marshall and supported for 40 years by administrations and Congresses of both parties. But you seem to implicitly endorse the myth that Reagan played a major role — perhaps even the lead actor — in the dénouement of that drama. I wrote about that at length here: http://daggatt.blogspot.com/2009/10/great-myths-of-ronaldus-magnus.html . From the context of your comments, I assume you agree. Republicans have done a GREAT job of systematically and firmly establishing the myth that Reagan single-handedly brought down the Berlin Wall, ended the Cold War, etc.– to the point where it is now rarely challenged, even by liberals. We need to help re-establish the counter-narrative.

My second quibble: Another myth that has been firmly entrenched (this one was actually started by the Wall Street Journal editorial page about 30 years ago) is that the Smoot-Hawley tariffs were a major factor in the Great Depression. You state: “The Democratic Party, under Truman, and Republican moderates, such as President Dwight Eisenhower, held fresh and painful memories of the Hawley-Smoot tariffs, instituted under Herbert Hoover and the Republican Congress of 1930, which triggered a trade war that deepened the Great Depression.“

Ben Stein (unlike his late father, Herbert) is an idiot when it comes to economics, and mercifully the New York Times has finally dropped his Sunday Business column on the subject. (Stein should stick with acting roles, like his famous turn as the stultifyingly-boring economics teacher — talking about Smoot-Hawley, as it turns out — in Ferris Bueller’s Day Off). But he was actually right on the mark on this topic (even a blind squirrel finds a nut sometimes: www.nytimes.com/2009/05/10/business/10every.html?_r=1):

“At the time of its enactment, exports were only about 5 percent of the economic output of the United States and still outweighed imports. (Even now, exports are a smaller part of output in the United States than in any other large developed nation.) To say that the act, which applied to a distinct minority of imports and which raised tariffs generally by only about six percentage points, caused the Depression is almost comical. It did no good, but compared with the titanic monetary policy disasters of the era, the effect of Smoot-Hawley was probably very small, or so most mainstream economists believe.

“However, a number of well-known people, especially my former colleagues at The Wall Street Journal editorial page, the late Robert Bartley (a genuinely great guy) and Jude Wanniski, began in the mid-1970s to popularize the notion that Smoot-Hawley and not monetary policy mistakes was the real cause of the Great Depression.”

GDP declined by 33% during the Great Depression. Even if Smoot-Hawley killed 100% of US exports at the peak of the Depression (it didn’t) that would have accounted for only a small fraction (15%) of the decline in GDP. (More on the subject in this post of mine: http://daggatt.blogspot.com/2009/05/new-new-deal.html .) 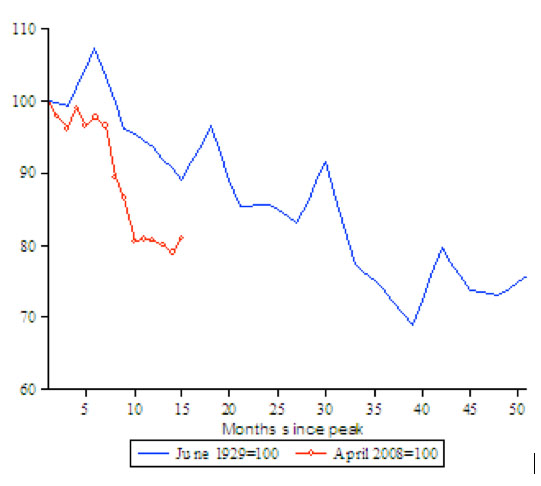 Final minor point: I will refer you to my post on the anniversary of 9-11 which makes somewhat related points, that there is much to be proud of in accomplishments of the United States government: http://daggatt.blogspot.com/2009/09/on-anniversay-of-9-11.html . It is the right, not the left, that has become the primary domestic source of hatred of the US government and what it represents.

Now to the main point. While this is oversimplifying somewhat, basically as long as we run large trade deficits, we will run large federal budget surpluses, and vice versa. The relationship is not absolute, and there are adjustment mechanisms (primarily effects on private savings and investments). But we aren’t going to be able to bring our long-term federal budget into balance without addressing our persistent trade deficits. This is what is known as the “twin deficits hypothesis”, which is summarized well in Wikipedia:

The theory goes as follows:

where Y represents National Income or GDP, C is consumption, I is investment, G is government spending and NX stands for net exports. This represents GDP because all the production in an economy (the left hand side of the equation) is used by consumers (C), investors (I), and the government (G), and the leftover production is exported (NX). Another equation defining GDP using alternative terms (which in theory results in the same value) is:

where Y is again GDP, S is savings, and T is taxes. This is because national income is also equal to output, and all individual income either goes to pay for consumption (C), to pay taxes (T), or becomes savings (S).

If (T-G) is negative, we have a budget deficit.

Now, assume an economy already at potential output, meaning Y is fixed. In this case, if the deficit increases, and savings remains the same, then this last equation implies that either investment (I) must fall (see “Crowding out (economics)), or net exports (X-M, or NX) must fall, causing a trade deficit. Hence, the twin deficits.

Though the economics behind which of the two is used to finance the government deficit can get more complicated than what is shown above, the essence of it is that if foreigners’ savings pay for the budget deficit, the trade deficit grows. If the countries own citizens’ savings finance the borrowing, it may cause a crowding out effect (in an economy at or near potential output, or full employment).

As I noted, the correlation isn’t absolute, especially in the short term, but it is strong (http://en.wikipedia.org/wiki/File:TwinE.PNG) over the long term:

FT’s Martin Wolf (the best financial journalist in the mainstream media) had a good column last week on the need for China to let its currency float against the dollar (“Grim Truths Obama Should Have Told Hu”).  This is probably the greatest source of instability in global financial markets.  Unless it is addressed, we are being set up for another crash — and this time we will have fewer policy tools at our disposal to cope with it.
Keep up the good work.
Cheers
Russ

Russ, when you are tilting at a windmill as huge (though illusory) as “Reagan defeated the USSR” you need to use some rhetorical method.  “Certainly, he deserves at least as much credit as Ronald Reagan” is both a true statement and about as much as I would be able to convincingly get across, nudging people toward sanity.

I am in complete agreement that Hu and the Chinese face a watershed moment.  If they try to squeeze more golden eggs out of the tired American goose, they will be penny-wise and very foolish.  As they are to foster any nationalist resentment of the US.

THEY are the ones I actually wrote the article for, pointing out that every one of their dynasties fell for the same mercantilist pattern that they think is oh-so-clever.  It was only clever because we cooperated, for 60 years.