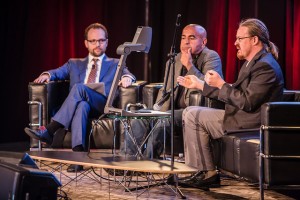 After more than ten years of development and with more than 200 million users on parent company SoundHound, virtual assistant Hound seems poised to take on Siri, Cortana and Google Now all at once.

One of the things that sets Hound apart is context: CTO Tim Stonehocker explained that Hound can actually remember your preferences and the context of previous questions to allow you to speak naturally.

What areas are you searching within? What do you consider walking distance? What is your definition of ‘open late’? Hound will remember all of these things to answer more complicated queries that include inherent personal judgments and assessments: For example, find me restaurants within walking distance of home that are open late.

“I feel like when I’m speaking to Siri I have to speak like Siri, like a robot,” said moderator and Scout co-founder Brett Horvath. Hound, he said, really picks up well on accents and natural language — a symptom of SoundHound’s years of musical and sound analysis.

But even calling Hound a virtual assistant does it a kind of disservice. Hound has already scaled the interface across 50 domains, setting it on-par with Siri and Cortana. But it has also launched Houndify, a development platform available to developers by request, to help it scale to all domains and across devices.

“We have thousands and thousands of other companies .. who are developing things using our platform,” said SoundHound investor Kamran Elahian. Elahian is the chairman and co-founder of Global Catalyst Partners.

What will that mean? Stonehocker described seeing a SoundHound developer eying the company espresso machine a few weeks ago. He could tell, he said, what he was thinking, “and I encouraged him to take it apart.”

“Now we have a Houndified coffee machine.”

In a remarkable demo video, Stonehocker showed Hound brewing an espresso while talking about the weather in Park City, the altitude and what football games are on this week.

As Elahian sees it, Hound could be a breakthrough technology for the Internet of Things. “Our vision has been that Hound would be the one that would unify all these things … When you’re talking to your coffee machine about your favorite sports team and you move on to your toaster, it should know [what you were talking about].”

As the first investor in SoundHound, Elahian also recounted how he’d seized the opportunity to fill Hound’s first $5 million round when the two were still just Stanford masters students with a great idea.